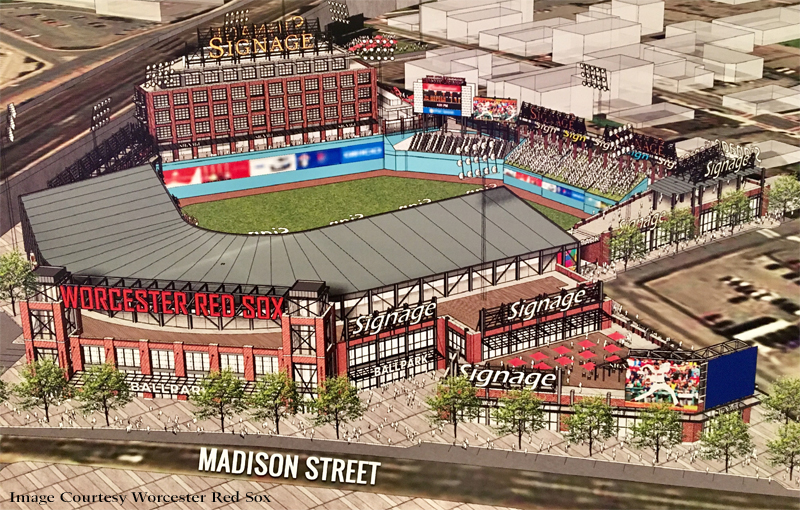 You might have heard that the Pawtucket Red Sox, a farm team for the Boston Red Sox, is now planning to move into Worcester, Massachusetts around March 2021. The new field will be called the Polar Park and will be a mixed-use, year-round space. It’ll be located on Madison Street in Worcester. The entire Canal district will be revitalized including two new hotels. Even Kelley Square will be revamped.

On Tuesday, January 22nd, 2019, Dr. Charles Steinberg met with about 40 members of the Worcester-area art community to talk with them about all of the opportunities this would present. We met in the Worcester PopUp space. Present were Erin Williams of the Worcester Cultural Coalition, Hank von Hellion of the amazing Worcester PopUp space, Juliet Feibel of ArtsWorcester, and many other local arts luminaries. It was an incredibly animated, creative, and productive session. Kudos to the team who arranged this meeting.

We began with a pair of video presentations laying out what the new WooSox arena would be like. Again, this isn’t just about a seasonal “ball park”. It’s about event space, hotels, and all sorts of other options. The Worcester Red Sox team would like to involve local artists in all aspects of this, even in creating murals and signs while the construction is being done.

Here are my (Lisa Shea) notes. Note that there were a LOT of artists speaking up, so I was scribbling as fast as I could. I apologize if I got anything wrong in my note-taking.

* During the construction period, it would be great if there could be murals of players posted, to build interest. The construction fence could hold some of these murals, and somehow they could be taken off when construction was done so they weren’t “lost”.

* We should focus on local artists and living artists to support them.

* Kelley Square is being redesigned – there’s a meeting on Wed 1/23/2019 to look into this. Steinberg said his group was meeting with the City of Worcester every two weeks to stay on top of things like this.

* They want to make Madison Street far more pedestrian friendly. They want it to be a place where families can safely walk.

* The team needs a nickname. Many like “WooSox” but other ideas are in play. Send all ideas to them.

* Some art ideas with themes are the history of baseball, the Red Sox, Worcester’s baseball history, and so on. But also they want art which showcases the style of Worcester artists, whatever that might be.

* Gallery space will definitely be included in this project. They might have one-night special shows for special events. At other times they might rotate the show weekly to go with themes. It should feature local art.

* They are aiming to draw 5,000 to 10,000 visitors to every single game. Their primary focus is on families and college students.

* They want this area to “look and feel like Worcester”. It should have architecture and art which evokes Worcester.

* They definitely want art galleries and art receptions which just “happen” to be at a ballpark.

* They talked about having local artists curate artwork for the two incoming hotels, so that patrons staying at the hotel can enjoy local artwork in their rooms.

* They want musical performances playing while people are coming in to the ballpark to watch a game.

* They will integrate local breweries and local food options like Table Talk Pies.

* Artists should be hired officially and paid well, to respect their efforts.

* Art which is supplied could be digitized and shown on hotel-room channels to help spread the word.

* Shows should be accessible to the low income youth. Not just in tickets, but making sure they have free transportation as well. The park plans to give every single student in Worcester a ticket every year and they’ll work on making sure the students can easily get TO and FROM the park.

* They don’t see this “just” as a ballpark but as an interlocking series of park spaces for Worcester residents (and the region) to use and enjoy.

* Their bedrock of support will be from families and college students.

* They want to allow families to bring in food, so that food prices are not a hurdle. They then want to make sure their provided (concession) food is both high quality and low price so it is a valid option.

* They plan on 7,200 seats but on 10,000 attendance by having play areas and running-around areas for kids.

* Make sure there are strong vegetarian and vegan options.

* Promote the strong African immigrant community in the art and exhibits.

* Have day games not just on weekends but also on weekdays.

* Allow for pop-up music / spoken word options along the lines of SOFAR.

* Provide internships for students so they can learn about all the great jobs that exist.

* Have opportunities for local musical artists to participate in the Anthem and other things. It was mentioned that Pawtucket has an “O Say Can You Sing” competition so everyone has a chance. Here’s a link to the 2018 one – O Say Can You Sing

They’re planning a 400-500 slot garage opposite the park on Madison street. The plan is not for one gigantic lot but for a bunch of lots all around so that people can easily get to one whichever direction they come from.

Event space options there will hold up to 400 people.

Here is the Facebook page for the Pawtucket Red Sox:

I’ll let you know as we hear more information! Ask with any questions!

To learn more about the Worcester PopUp Space –