Happy Birthday to Man Ray! He was born on August 27, 1890. He was famous not only for his photography but also for photograms, which is when light-sensitive paper is used without a camera. Man Ray wasn’t satisfied just calling his “photograms” though. He called his works of art “Rayographs” after himself.

He was born Emmanuel Radnitzky in Pennsylvania but in Paris he re-invented himself. He was reborn as a new person. 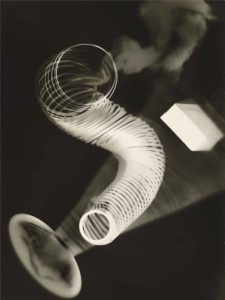 Here is one of Man Ray’s rayographs. He lived in Paris for most of his life and loved the surrealism freedom. In addition to his wildly abstract works he also created highly acclaimed portrait photos of many of the luminaries of the time – James Joyce, Gertrude Stein, and so on.

Man Ray even explored light painting! He would leave his camera exposure open and then move around in front of it with glowing items. He signed his name on one photo.

One of his most famous quotes is:

“There is no progress in art, any more than there is progress in making love. There are simply different ways of doing it.”

Man Ray at the Museum of Modern Art

One thought to “Happy Birthday to Man Ray”